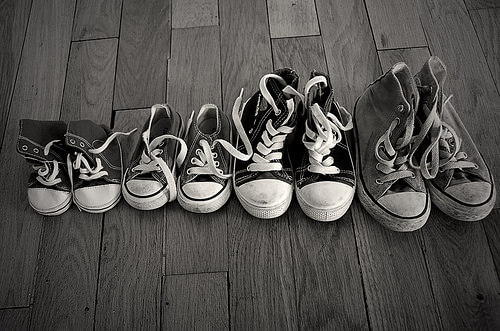 For a few weeks now I have been scratching my head on what to blog about next. But today, it hit me. And there’s a bit of a backstory to this one…

Shortly after leaving sixth form in my quiet suburban neighbourhood, I went and found my first job. A bit later than my peers, my first role came when I was 17. The job itself was simple, a Sales Assistant at Sainsbury’s. Daily duties would include offering friendly customer service, stock control, reductions and obviously, stacking shelves. For what it was, on a part-time 12 hour a week permanent contract, I enjoyed it and it got me by. Heck, there’s no better feeling than that first paycheck, where your eyes are opened to the world. £350 a month!? That £12 a month pocket money I had irregularly coming in from my dad for the last 4 years was a thing of the past in one fell swoop.

Confident with customers and what my role entailed, I was now for the first time being referred to as ‘a man’. I vividly recall the first time I overheard a mum shopping with her young son to ‘ask the man where the creme fraiche is?’. It was a bizarre feeling. Fast forward toward the end of my two year tenure, it dawned on me that I needed to get out of the retail market. I felt I had learned what I could from my first job.  Now in more of a ‘reliable, team leader-esque’ role, I was at home on the shopfloor and felt I had to break free from it before I was sucked in to being trapped in retail for life. The one month’s notice flew by and I’ll always remember that last bus ride back home. Emotional from what that first job had done for me, I was now officially a man on a path to progress his career.

Growing into an adult

It was that first role as a Sales Assistant that really sprung me in to the world of work. Away from the routine school-life, I was now in charge of where I wanted my path to lead. It wasn’t about the money, it was about the independence and growth. Mid-way through university by this point, I was keen to find a placement role that would complete my Computer Science degree. I started to look online for available roles and one sprung out at me in particular. Working at Disney in their games department. It was the dream job that I would have thought would only present itself to me much later in life. But, the disappointing fact was that I had only just missed the deadline for applications. I plumped for it anyhow, spending every waking moment refining my application so I could have a good shot while my toe was in their figurative online door. The next day, I was called for a phone interview.

This was unlike any other interview I had previously. I was tasked with some taxing, personal questions like ‘who inspires you’ as they ventured deeper and deeper in to my responses… but alas it turned out I had passed. The face-to-face interview was lined up next where I’d also be tested with a presentation. It had to be on a mobile game to demonstrate that I knew the industry well while I provided insightful and entertaining content to the panel. Honestly, it was a piece of cake. The game I chose was World of Goo. Give it a try if you haven’t already, it’s one of the few mobile games out there that is really worth the premium price tag. The reason the most challenging interview of my life was a breeze was because of my passion. For what I lacked in the presentation, my hobby had filled the gaps. Not only had I made the presentation, but I ensured I had the game to hand also. With all the work I had put in, I had provided that extra effort other candidates hadn’t for them to remember me by. Handing them my phone to give that same level of engagement I had was a great move.

The manager who hired me saw something in me and my poorly written CV. So I soon found myself with my second job, working for Walt Disney in Hammersmith. Albeit, I had come second place. There was a candidate who had much more qualification than I. She was hired for the role while something quite remarkable happened on my side. A new, temporary two week unpaid role was created just for me as the manager had seen a spark in my eye that he wanted to alight. I simply couldn’t turn the offer down. My passion for gaming had got me in to their prestigious revolving doors in their Disney Interactive arm. It was there I met some amazing people on their graduate scheme. Seeing how a gaming company operated was awe-inspiring. For the first time, I had insight in to the role I wish to have as a long term career. It was just how I expected too. The people were what made Disney what it is. The world-renowned Disney values were emanating from every person in the office. The people were some of the most down-to-earth, professional and fun people I’d meet in a workplace.

Once the two weeks flew by, the manager had taken time out of his hectic schedule to sit me down and allow me to learn from his greatness. We would sit together at lunchtimes and during the work-schedule to take a look at the work I had been doing and my CV. After the great working relationship had come to a close, I was left with a stand-out CV. The amazing advice Matt had gave me would live with me forever. Plus, I now had Walt Disney’s name to add to my growing résumé. I learned that it wasn’t all about qualifications anymore. Your employment history has just as much, if not more of a factor when it comes to standing out in a crowd of paperwork. This was something you would never hear from a teacher at school.

My professional journey would then take me to other offices that would harness my (now earned) Computer Science degree. With each time I changed job, I unexpectedly learned more. I grew as a person and added more skills to my repertoire. I met a variety of different characters and while in a professional working environment, found myself new contacts and friends along the way.

Throughout my journey, I found workmates who would make my day to see as I seek their insight. From the few jobs I have had to date, I always find I have learned something new about myself or a new technical skill from the job at hand. Since that first job at Sainsbury’s, I’ve always had the attitude to work that I’ll leave when I feel I have peaked. I’m not one for settling for second best as there are plenty of opportunities out there to grow. Routine can be the bane of many people’s lives and I for one do not wish to settle for it.

Since visiting home over this weekend in the run-up to Christmas, I’d like to offer my sentence of advice. Simply, ‘Never forget where you came from’. It’s astounding sometimes to take a few minutes out of your day, recognise what you have gone through and who you have become.